Sean Hannity is sad that President Idol is not getting more credit from the media for fighting the coranavirus with his bare hands.  I am sorry, Sean, but it seems like you want to hold the monopoly on who can be the most obsequious to President AMERICA…
Post a Comment
Read more

February 25, 2020
It is hard to understand why the Chronicle and Tax Assessor ANN HARRIS BENNETT would deny and conceal her habitual violation of The Texas Election Code.

Anyone can find the records at the county clerks office or online. Bennett filed numerous late reports and did not file two reports. They think this will blow away after the March 3rd primary.

In 2012 Bennett ran for Tax Assessor in the Dem. primary May 29. The 30 day report for the Nov. 6 general election was one day late and not properly notarized.

CHARLES KUFFNER IS REALLY OFF HIS KUFF

February 24, 2020
Charles Kuffner, well-known and influential blogger for 20 years, envisions himself as a kingmaker.

He is an informed and talented writer but many candidates know him as an insulting bully.

He omits information that is harmful to candidates that he and his patron, the Houston Chronicle, support.

I am more of a kingmaker than Kuffner. The candidates that I run against get elected.

Charles, wear some long pants and be a candidate yourself. You will learn some humility.

Bully bloggers who say that I and many other under-financed candidates are losers, perennials, gadflies and fringe candidates undermine our country.

Competition is good. You can learn something from anyone. Tis better to have run and lost than to never have run at all.
Post a Comment
Read more 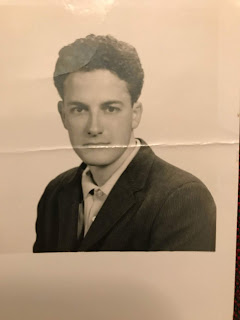 After graduating from the U. of Houston, I was attending law school when I made a move which altered my life forever.  I became one of the first Peace Corps Volunteers from Houston and was sent to The Philippines as a teacher.

If some Filipinos learned to say "ain't" and "yawl" and used double negatives, that would be alright. Although I was friendly and sincere, I might have felt a little smarter than those around me at times.

I had the shop teacher build a small one room building on the school grounds. I slept there a bit or would go there during the day. I needed a curtain over the window for privacy. I had someone sew a seam on a piece of cloth. But there were no curtain rods.

But my American know-how would not fail me. One morning I attempted to push a wimpy piece of string through the narrow curtain seam. The morning turned into lunch time and I was still hard at work.

Some students walked by and one saw what I was trying to do. She pulled out the string and …
Post a Comment
Read more 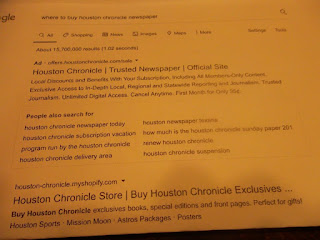 Above The HOUSTON CHRONICLE Store are these words "TRUSTED NEWSPAPER." To me that means "BUYER BEWARE." The store sells Chronicle exclusives, books, special editions, front page editions and says perfect for gifts.

The most difficult Chronicle collectible is unattainable: a Houston ChronicleTop Workplace poster. CHRON CON gets free publicity as HCAD proudly hangs these posters from HCAD entrance to the outhouses.

The most valuable is the 2017 edition which is still hanging along with 2018 and 2019 freebees. An autographed poster signed by HCAD Chairperson and Tax Assessor @voteannbennettand Chief Appraiser ROLAND ALTINGER would be invaluable.

In 2019 there are three. If Bennett is re-elected there will be seven …
Post a Comment
Read more 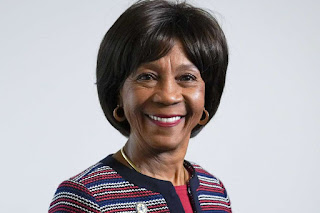 Where can a newspaper that conceals a candidates substantial Texas Election Code violations be reported? A newspaper that distorts the facts and slants editorial endorsements? The HOUSTON CHRONICLE is no longer trustworthy.

MARK MEDICI: You can stand by your ANN HARRIS BENNETT endorsement but you should reveal her mulitple election code violations. Each day you delay adds another day to CHRON CON COVER-UP. This stain on The Chronicle will not go aw…
Post a Comment
Read more 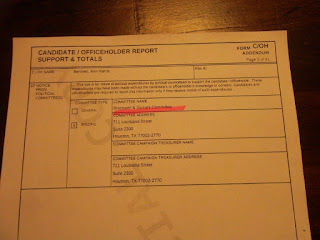 Poor Jasper was not allowed to mentioned in his "story" my allegations of Bennett's habitual election code violations or the Chronicle's cheap appraisals. Example in 2017 when Bennett took office the Chronicle building appraisal at 4747 Southwest Fwy. was reduced to 29 Cents per sq. ft.

Jasper, who sat silently for about 1.5 hours at the February 3rd screening, wrote that I had some conspiracy theory about HCAD and the Chronicle. He also wrote that I falsely claimed that Bennett received a contribution from Rudy Giuliani.

I feel sorry for anyone who is forced to do something that he/she does not want to do.  But Jasper's story confirms that THE HOUSTON CHRONICLE engaged in a COVER-UP of Bennett's election code violations.
Post a Comment
Read more
More posts